These Chocolate-Tahini Energy Balls are a sweet, nutty, healthy way to get your snack fix. Pop ’em in the fridge to have a healthy snack on hand all week! 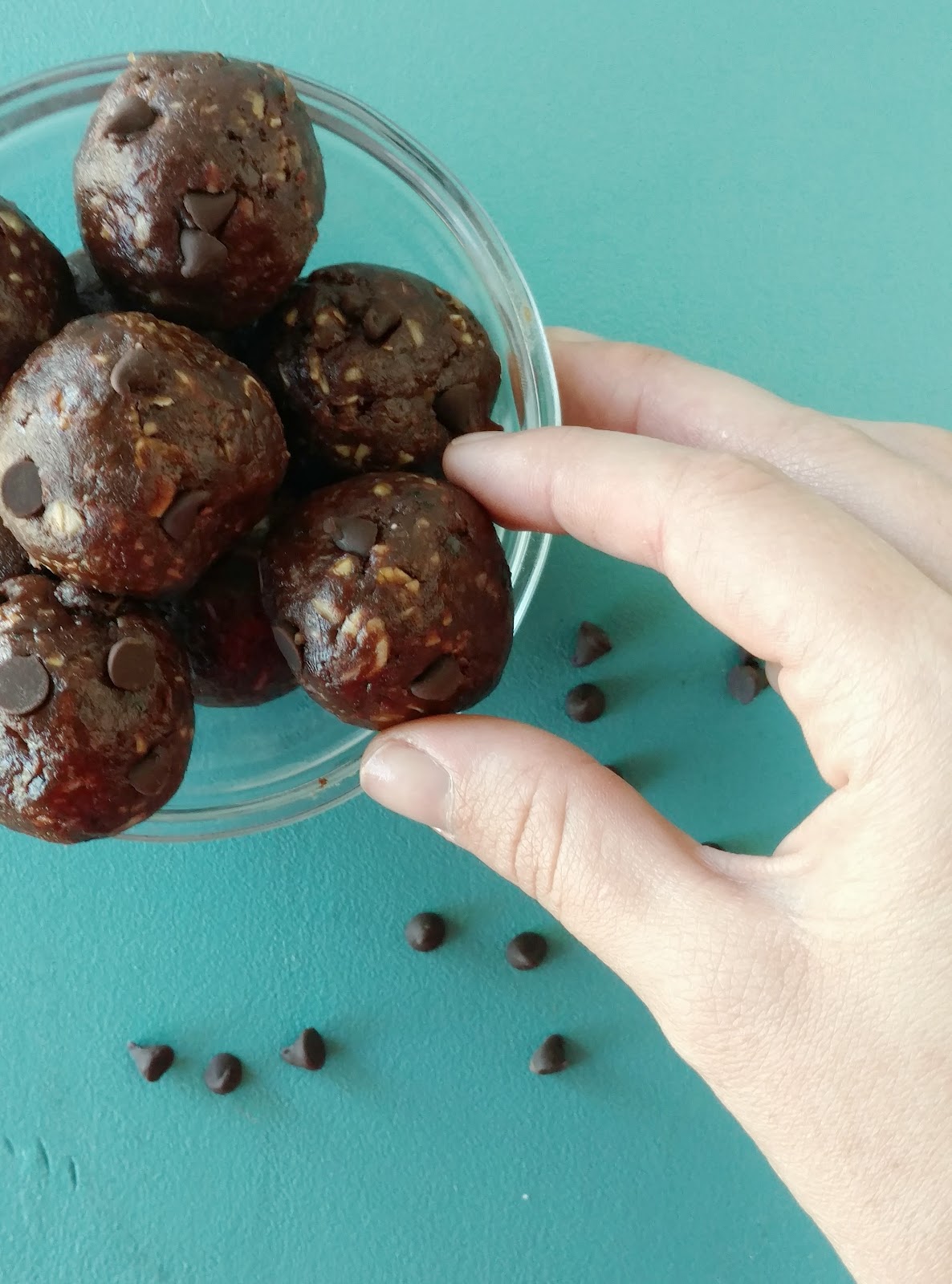 (CW: This post contains content about disordered eating, orthorexia, and weight loss, and may be triggering for some readers.)

This week, after two and a half years of eating mindfully, I finally reached my goal weight. That means that I’m 22 pounds down from where I was at my heaviest in 2014. Exciting, right? I felt like I should have been excited when I stepped on the scale, but then I came to the staggering realization that, even though I focused on getting there for so long, I just didn’t care about that number anymore. Why?

I’ll readily admit that I was sucked into “dieting” for quite a long time. There was a point—and it’s difficult to admit this—when I was weighing myself twice a day and writing down daily body measurements in a journal. If I fluctuated up, even by a single inch or by a few pounds, I was mad at myself. I tried to recall what it was that I’d eaten that could be responsible for that weight gain. It was exhausting, and it took an enormous toll on my mental and emotional stability.

I was holding myself accountable for something that was, in reality, impossible.

After living this way for about six months, I slowed down a bit, but I still kept weighing myself religiously. I saw nothing wrong with this behavior at the time; in fact, I thought it was healthy. I was still counting calories like they were currency being allotted to me, getting frustrated with myself even if I went over by less than 100 per day.

Then, around February of 2016, I stumbled upon the concept of eating mindfully. At first, I thought it was a load of, for lack of a better word, bullshit. It sounded so crunchy granola, like an idyllic California hippie dream. “Oh, I don’t diet; I just eat mindfully.” Yeah, right.

But then I tried it. I’m not sure why or at what point I decided to try it, but I did. And now, almost a year in retrospect, I can tell you truthfully that it’s not bullshit, nor is it crunchy granola. It’s honest, and it changed the way I interact with food. And get this—it made me stop caring about my scale.

Almost overnight, I went from weighing myself every day to forgetting that the scale existed.

For some reason, I felt compelled to weigh myself yesterday. I don’t know if it was that same deep-seated compulsion I felt two years ago, or if it was entirely by chance, but when I stepped on and saw the number I’d been seeking for two and a half years, I felt nothing. No excitement, no sense of accomplishment. Nothing. And at first I thought that was a bad thing, but I’ve since reached a different conclusion.

The reason I felt nothing is that, in reality, I’ve felt content about my body and my eating habits for several months now. I didn’t need the scale’s validation to complete that happiness. I never thought I’d say that I didn’t care how much I weighed, but here I am, and I’m saying it: my weight is no longer of any concern to me. That doesn’t mean, though, that I’ve given up on myself or that I’m going to adopt the same bad habits that made me gain weight in the first place. 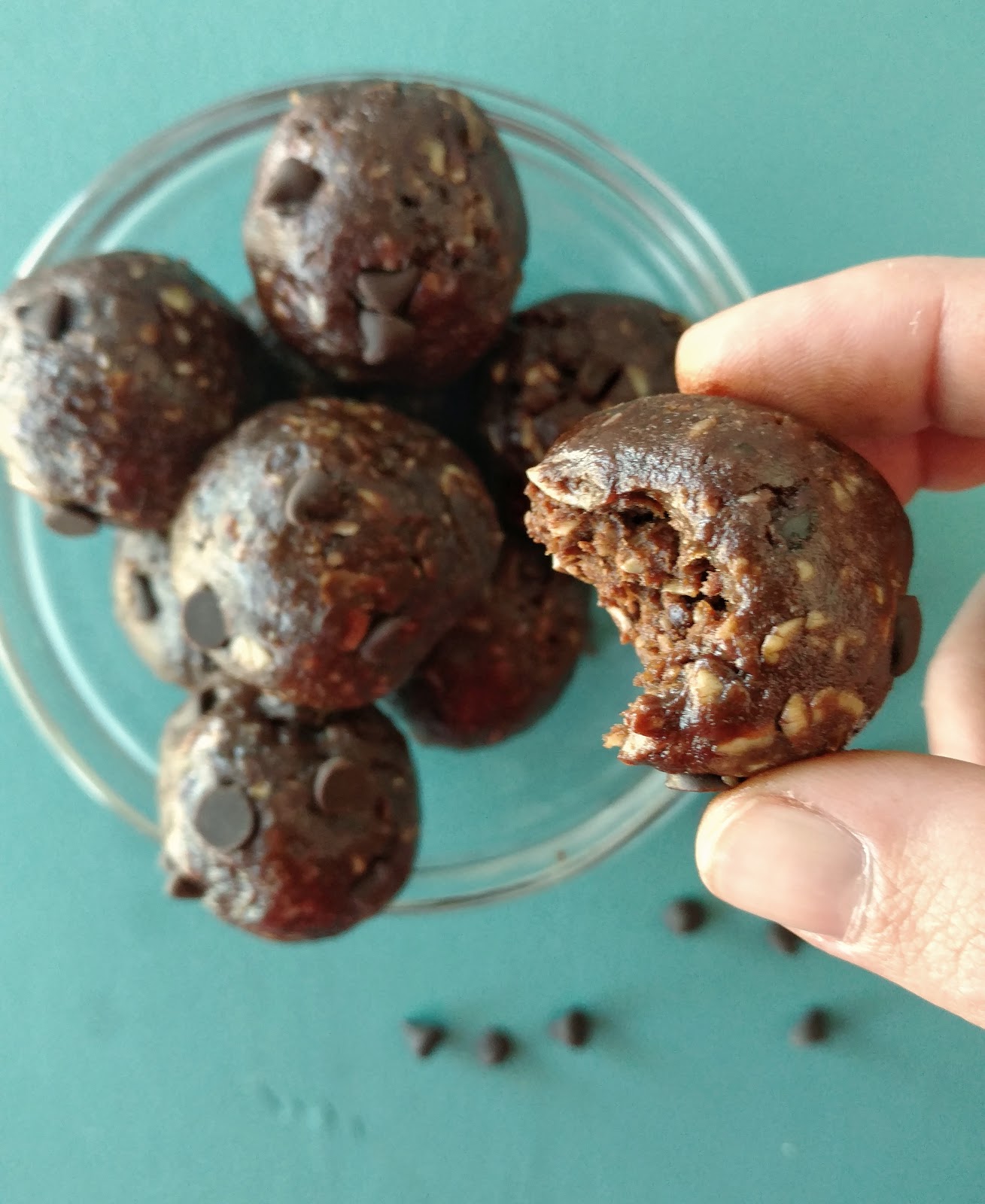 Instead, it means that I’ve started listening to my body and giving it what it needs.

This was not an easy habit to cultivate; in fact, in the beginning, it seemed next to impossible. How could I know what my body needed? And while it’s not as easy as listening to your body say, “give me spinach,” it’s easier than you’d think, as long as you stick with it.

(July 2019 edit: In looking back at this post, I’ve realized that I was still demonizing certain foods at this time. Reese’s Puffs have their own place in a health, balanced relationship with food. They aren’t an all-the-time food, but an insistent craving is nothing to be ashamed of. Go forth and eat Reese’s Puffs!)

These little chocolate energy balls are one such alternative.

They’re sweet, chocolatey, chewy, and naturally sweetened, so to paraphrase, they’re basically everything I want. And an added bonus? Energy balls are SUPER easy to make. So every time I’m craving something sweet after dinner, I can say, “no thanks,” to the foods that I know will make me feel bloated and sick and listless, and say, “yes please,” to the foods that bring me joy.

I’m sure a lot of others have struggled with similar issues while trying to lose weight. For you, dear friends, my advice is this: put down the tape measure and tuck away the scale. It will be hard and it will feel counterintuitive, but try to listen to your body. It will lead you where you need to go. And one day, even if it’s by accident, you may end up exactly where you need to be. I know I did. 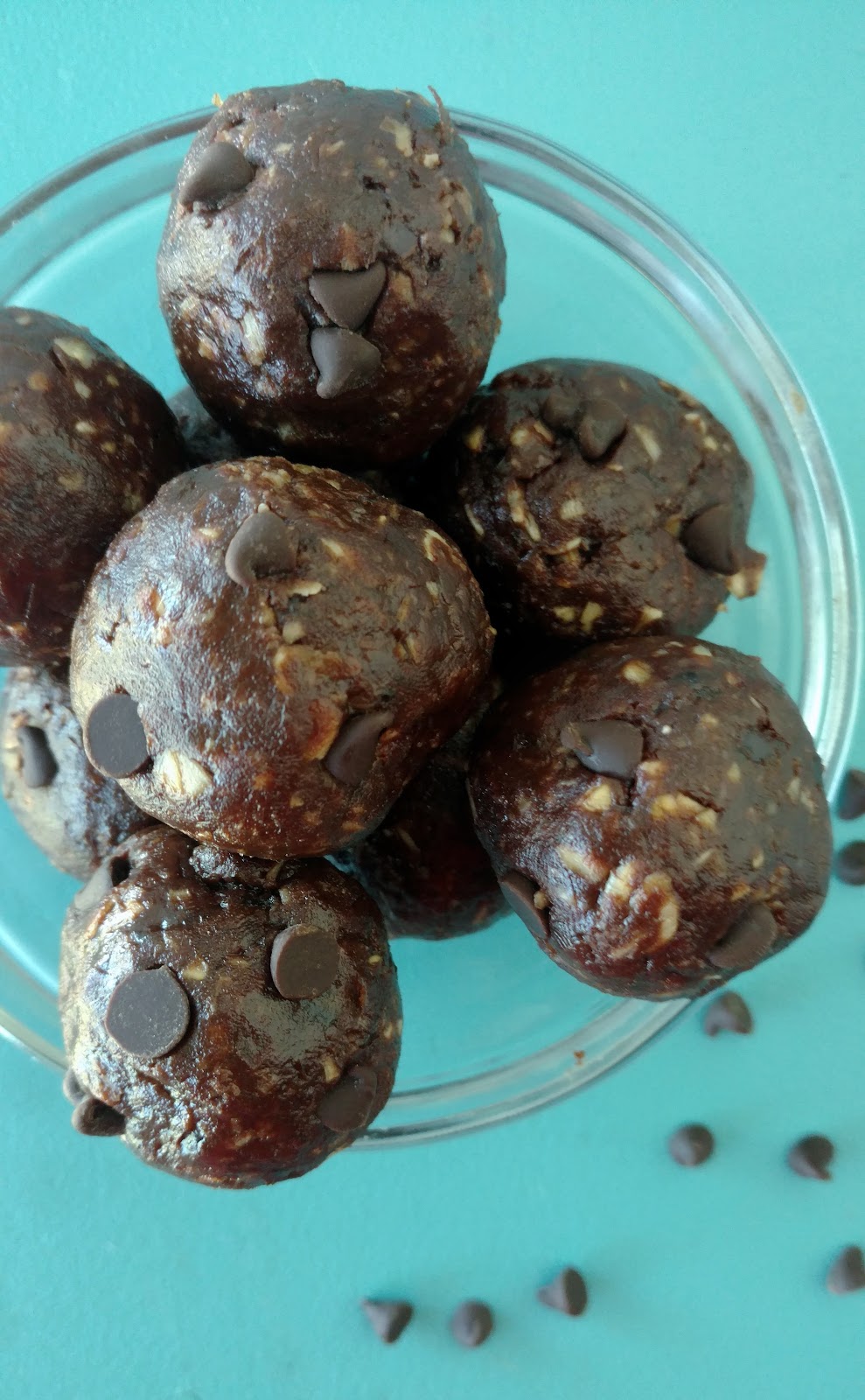 IF YOU MAKE THESE CHOCOLATE-TAHINI ENERGY BALLS, DON’T FORGET TO SNAP A PHOTO AND TAG ME IN IT ON INSTAGRAM @FEELINWHISKY! I LOVE SEEING WHAT YOU DO WITH MY RECIPES!

You’ve reached the corner of the internet where I share recipes made with whole foods and a lotta love. I don’t believe in fad diets or trends — just cooking real actual food and enjoying it with real actual people.

HELLO come hang out with me while I drink a glass

I'M BACK AND BETTER THAN EVER Y'ALL (jk i am back

HELLO AGAIN! So in case you missed it, I mostly li

Wishing I could go on a dreamy tropical vacation,

Just in time for Memorial Day weekend, these adora

My favorite part about summer? Cookouts. Most defi


Error: API requests are being delayed for this account. New posts will not be retrieved.